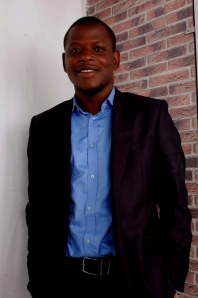 Tope Apoola is the author of the novel, Times of the Supermen. He is a Nigerian writer and was born in June, 1984.

Geosi Reads: Thank you for accepting to be interviewed here?

GR: How did you enter into the world of writing? Also, tell us a bit more about yourself.

TA: To answer that question, I would have to figure what happened in 1992 that made me to write a very short story. It could be that I really enjoyed Chaka the Zulu that I just read and then decided to imitate the story. I had started writing with the hope of publishing since my very first year in the Secondary school (High school). Then, I would read from my work to entertain friends in the class. I remember a classmate even editing the manuscript for me back then. I was so close to publishing that my Daddy’s co-worker had written the “forward” to the book but I was learning too fast and always felt I could do better every new day. I would write something today, feel good about it only to later see how inept I was, or how immature the work was. I never considered myself fit to write until recently when I picked stuff I had written three years earlier and still felt great about it (could be that I have stopped learning fast). I was really encouraged by the feedback I got from readers, whatever I write seem to stick to their minds even years after. I looked back to that, and decided I should be writing.

I schooled mostly in Akure, a town 200 miles from Lagos and studied Microbiology at Obafemi Awolowo University, Ile-Ife. Presently I am trying to clear my head, get things done before I proceed with seeking more knowledge. I better be doing it lest I’d start to feel bad about not doing it.

GR: Is Times of the Supermen your first novel? What is the book all about?

TA: Technically, yes. Of course, like many authors, I have several short stories; mostly unfinished manuscripts that I wouldn’t want to make my debut considering the quality of writing. Times of the Supermen, I think, is my first serious work. The book is about a group of wise men who finds a tiny clue to an emerging hypothesis that there existed a deliberate design, somewhere on the face of the planet Mars. If this is found to be true, then they would have a reason to suspect that a legion of superior creatures once lived on the planet.

Series of identical formations are also discovered on the surface of a rock in one undisclosed location. These symbols appear to have been carefully crafted by some super intelligent population many million years ago. Should there be a semantic relationship between them, scholars would purport that these ancient beings once visited the earth. Nations work to uncover the mystery symbol that is known to have formed in a prebiological time and the book shows that they might be diving beyond the waters of science.

GR: Does the book address a specific audience? Do you have any target audience when writing?

TA: The book is intended for international audience.

GR: You would agree with me that there are so many Nigerian writers all over the world. Being a young Nigerian writer, how would you define your voice? How unique is your voice different from other writers?

TA: It is said in the opening of my book, and I quote:

Reviewers have so far shared one opinion about the book, and that is the language or the voice has been a distinguishing factor.

GR: How has the book been received both in and outside of Nigeria?

TA: Distribution commences in February, 2011 but the book has evidently generated good anticipation in Nigeria. We are hoping for similar reception outside the country.

GR: Who do you look up to for inspiration? Any favorite author(s)?

TA: I consider almost everybody as potential source of inspiration but I expect to be inspired, and I always get inspired by people like Wole Soyinka; the Nobel laureate, Ayi Kwei Armah; author of The Beautiful Ones Are Not Yet Born and the gracious old woman, Maya Angeolu. I must also add that I am fascinated by many great medieval authors. Anne Frank; the little Jewish girl of the early 1990s makes me appreciate the nature of the human mind in a very rewarding manner. I hold the words of Ralph Waldo Emerson dearly and I appreciate South Africa’s J.M Coetzee.

My favorites are Dan Brown, Steve Berry and J.K Rowling.

GR: What was your reaction like when you first saw your name on the front cover of your book?

TA: Couldn’t sleep for a week.

GR: Do you have any favorite book(s)?

TA: Yes I do. I like The Grand Design by Stephen Hawkings, How Now shall we live by Charles Colson and those are non-fiction.

GR: What book are you reading now?

TA: The girl who kicked the hornets’ Nest by Stieg Larsson and The Phoenix by Chika Unigwe.

GR: Do you write part-time or full-time? 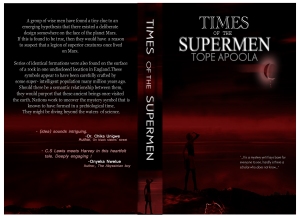 GR: Where can readers get copies of your book to buy?

TA: Copies can be ordered from amazon.com and as from February, it will be available in our major bookstores, supermarkets and every other place where the presence of books will not constitute menace.

GR: What should your readers expect from you in the near future? Any work(s) in progress?

TA: Yes, I am working on a sequel to Times of the Supermen, and it is presently titled ‘The Pilgrimage.’ I am also trying to set up Book cafes, a beautiful concept that I hope our friends will find it interesting.

TA: I think the joy of living is to open up our minds and explore different cultures.

This entry was posted on Tuesday, November 30th, 2010 at 10:49 am and is filed under Uncategorized. You can follow any responses to this entry through the RSS 2.0 feed. You can leave a response, or trackback from your own site.