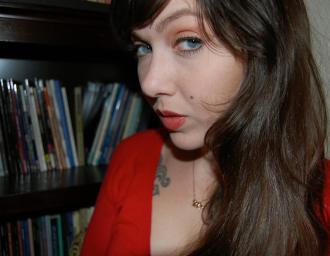 Ruth Awad has her MFA in Creative Writing from Southern Illinois University Carbondale. Her work has appeared or is forthcoming in The New Republic, Rattle, Southern Indiana Review, CALYX, Diode, The Drunken Boat, Copper Nickel, Anti-, Vinyl Poetry, Epiphany, and elsewhere. She won the 2013 and 2012 Dorothy Sargent Rosenberg Poetry Prize and the 2011 Copper Nickel Poetry Contest. She was also a finalist for the 2013 Ruth Lily Fellowship, and her work was anthologized in The Hundred Years’ War published by Bloodaxe Books.

Ruth Awad: My mother has been a nurse most of her life, and about ten or so years ago, one of her patients was a tattoo artist. He was probably smitten with her (she is beautiful in every kind of way) and grateful for the way she pours herself into her work. Anyway, they bonded and started talking about art. My mother is a painter, and she showed him some of her work. Her patient was in the process of selling his tattoo studio, and as a condition of its sale, he required the buyer to take my mother on as a tattoo apprentice. She’s been a tattoo artist ever since. I think a lot of being a tattoo artist is equal parts talent and networking. It’s such a close-knit community that it can be hard to break into.

Geosi Gyasi: What does it take to be a tattoo artist?

Ruth Awad: In the United States, the law varies from place to place. Some states require that you have a tattoo license; others don’t. I was trained by my mother in Nashville, Tennessee, which requires you to complete a year-long apprenticeship with a licensed tattoo artist before you can get your own license. You also have to take a test through the health department, which aims to make sure you know how to properly sterilize equipment and prevent cross contamination.

Of course, you should also know a thing or two about how to draw, but you’d be surprised how many artists can get by with just tracing a stencil on the skin. And a steady hand is always a plus.

Geosi Gyasi: What’s the most important work you’ve ever done as a tattoo artist?

Ruth Awad: That’s hard to say. I’ve tattooed a lot of people I care about immeasurably, and that kind of work becomes a visual representation of our bond. I’ve tattooed my mother, my sister, my friends, a handful of romantic partners.

Geosi Gyasi: How do you deal with clients who want their genitalia to be tattooed?

Ruth Awad: Oh, sheesh, I have had a few requests to tattoo genitalia (notable: three holes so a certain dude’s member would look like a flute), but I always refer those clients to other artists. I’m not being compensated enough to suffer that.

Geosi Gyasi: Does it cost to be tattooed?

Ruth Awad: Yes, but the cost varies. My mother and I price our work based on the size and intricacy of the piece because we only do custom tattoos, meaning we design them ourselves. Some artists have a “shop minimum” – usually $50 – just to get out their needles and ink. But a lot of work and expertise goes into a tattoo. A good artist knows how to design a piece to complement the body, how to counsel clients on their choices, how to be precise even when their hands are tired. You’re paying for the art, of course, but there are a lot of other things at play, too.

Geosi Gyasi: How do you combine your work as a tattoo artist and writer?

Ruth Awad: I feel like I lucked out on that front because my work as a tattoo artist is so closely tied to my relationship with my mother – something I wrote about a lot in the past and that I’m revisiting now. After my parents divorced when I was six, my dad got custody of my two sisters and me. I’ve always lived away from my mom, and when I turned 19, tattooing became a way for me to connect with her and understand her life that always seemed separate from me.

Geosi Gyasi: You have an MFA in Creative Writing from Southern Illinois University Carbondale. What sort of books did you read as an MFA student?

Geosi Gyasi: Which teachers had the most influence on your writing?

Ruth Awad: I worked closely with Judy Jordan, who was my thesis advisor during grad school. I’d stay after workshop and we’d talk about everything – romantic woes, rescuing dogs from puppy mills, vegan recipes. She is still one of my foremost mentors and always pushed me to write what I was afraid to write. She encouraged me to never settle for a good enough poem, but to strive to write the hard one. I also worked with Allison Joseph and Jon Tribble, who taught me a lot about the publishing world and how to consider my work in the context of all the literature that’s out there. That perspective helped me put together my first manuscript. And there’s a piece of Rodney Jones’ advice that continues to inform my writing: “Loosen up, girl.”

Geosi Gyasi: You were the winner of the 2011 Copper Nickel Poetry Contest and the 2012 and 2013 Dorothy Sargent Rosenberg Poetry Prize. Do prizes mean anything to you?

Ruth Awad: As a poet, you write and write and write and wonder if it’s really worth all the effort and rejection. I think that poetry is about more than expressing yourself – it’s about communicating. It’s audience based and demands participation. So in that sense, winning those prizes means quite a lot to me – it’s proof that somewhere out there, these poems are connecting with people and resonating.

Geosi Gyasi: Do you earn a living from writing?

Ruth Awad: I’m a copy editor for an insurance agency, and I’m a little surprised by how much I like it. I thought it would mean drudging through my work life like Kafka at his bread job. It helps that I work remotely. I get to hang out with my dogs during the workday.

Geosi Gyasi: Tell us about your two pomeranians?

Ruth Awad: You know, sometimes, I feel as though I have to apologize or self deprecate when I talk about the dogs. Like, I have to say, I love them so much, but I’m just a crazy dog lady. But I think there’s something almost religious in my appreciation for the girls. I’m grateful for their love every single day.

Geosi Gyasi: You’ve been modeling for sometime now? Do you still model?

Ruth Awad: Not in any regular capacity. I modeled a lot when I was younger, but instead of boosting my self-esteem, it had the opposite effect. I’d look at the pictures from a shoot and find every flaw with my body. Or, I’d think, I’ll never look like that again. Pulling away from modeling was an act of self-preservation in a lot of ways. In others, it was part of growing up and realizing my interests are elsewhere.

Ruth Awad: It was inspired by this photograph by the French war photographer Françoise Demulder. I couldn’t get the image out of my mind – I wanted to hear that woman’s voice as she’s pleading to the militiaman.

Geosi Gyasi: How did the idea for “The Green Line” come to you?

Ruth Awad: I wanted to give a voice to that haunted feeling that certain places have – places that have seen great tragedy. I was reading a lot about the Lebanese Civil War, and I learned that the Green Line separated warring factions in Beirut. There was a picture of grass and trees rising up through the concrete because it was unoccupied for so long. It frightened me to think about the earth reclaiming that space.

Geosi Gyasi: What are you currently working on?

Ruth Awad: After working on journalistic poems for so long, I’m shifting gears a little. My new collection is much more lyric. Poems that move like smoke. The common thread is that they are meant to be read like spells.

Geosi Gyasi: When do you write?

Ruth Awad: On the weekends, mostly, fueled by lots of coffee. I think about a poem for a long time so that when I sit down to write, most of the work is already done. Sometimes the poem comes through a certain voice; sometimes, a line. It’s rarely a driving idea or subject that brings me to the page.

Geosi Gyasi: Tell us about your poem “Inheritance” published in Rattle?

Ruth Awad: That poem is based entirely on one of my father’s experiences while he was growing up in Tripoli, Lebanon during the war. I wanted to capture the romanticism of war – how it can seem like a game. I also wanted to get the idea about how ordinary war can be when exposed to it day in and day out. My father said at one point during my interview with him, “It was boring. I couldn’t go anywhere.” It shocked me. I had all these (naive) notions about how war affects civilians. But my father’s very concise answer underscored what survival is all about.

Geosi Gyasi: What sort of relationship do you have with Lebanon?

Ruth Awad: A distant one, but I hope to fix that soon.

This entry was posted on Tuesday, October 14th, 2014 at 6:40 pm and is filed under Uncategorized. You can follow any responses to this entry through the RSS 2.0 feed. You can leave a response, or trackback from your own site.