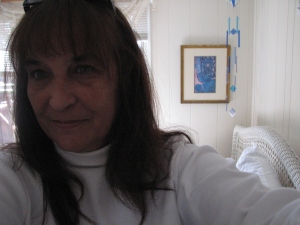 Penny Freeland is an NYC transplant, who now lives on the beach in Cape Hatteras, NC. Her poetry is urban, yet full of nature. She still loves her native city, but finds long walks on the beach and the sound of the ocean, soothing. It is a far cry from the hustling traffic and concrete pavement, she once walked. Her work has appeared in fine journals, such as The Ledge, Black Rock and Sage, Red Booth Review, Rattle and Eclectia.

Geosi Gyasi: You’ve said somewhere that you began writing poetry before you could hold a pen. Could you comment on this statement?

Penny Freeland: Yes. I began composing, before I could actually write letters and words. I memorized my poems and songs. I often sang them to my mother. They were sometimes sad and many times about love. For some reason, love seemed to be a sad topic. I would get tears in my eyes. I lost my father at the age of seven and wrote many poems about that loss. They made my mother cry. I was often accused by my family, “You didn’t write this!” I guess it was a form of flattery.

Geosi Gyasi: Could you tell us something about New York City where you were born and raised?

Penny Freeland: I was born and raised in Chelsea, NY. It was really a city, so there was not much in terms of nature. There were some trees that were planted in cut-out squares of concrete. They were skinny and did not add much to the environment. There was sky, but it was high above the buildings. When I was around the age of five, I realized that the city was built on top of nature, if that makes sense. I had thought the man-made world was there first and that man added the nature part. It was a stunning realization and it affected my writing. I think children who grow up in nature are lucky, though I did have the advantage of culture, art and museums.

Geosi Gyasi: What motivates you to write?

Penny Freeland: Sometimes a memory can be the trigger. I am the type of writer who writes when inspired, though my mentor, Marie Ponsot would tell me I needed to write all the time and stop doing that. If I do write when uninspired, the work is not very good. To tell the truth, I did not write any of my work. A voice begins in my head and I just copy it down. I often do not know where the piece is going, or how it will end. I obey the voice. I do admit, I edit it later!

Geosi Gyasi: Do you think about money when you write?

Penny Freeland: Money has never occurred to me while writing. I have made very little money as a writer, so it is not something that dictates the work.

Geosi Gyasi: Are you conscious about style when you write?

Penny Freeland: Not at all. I never even consider style. I allow the poems to be what they want to be. They tell me what style, if any. I do not write in forms, and if I am conscious of style, again the work will not be very good.

Geosi Gyasi: What influenced you to write the “Incidentals”?

Penny Freeland: My constant, To Do lists. I write them, but really love to cross things out. That was my inspiration.

Geosi Gyasi: You teach at American Public University. How do you combine teaching and writing?

Penny Freeland: I generally teach writing, so it is helpful to be one. I always understand what the student is up against, as I am up against the same thing. What hurts me is that I am too aware of grammar, which does not work for creative writing. I have to allow myself to break rules when writing.

Geosi Gyasi: Is it difficult to teach students how to write?

Penny Freeland: I do not find it difficult, but I do get some students who are not ready for college-level classes. In many cases, their high schools have failed them. In those cases, I have to get to work and teach some very basic things to help them get on par with the rest of the class. It is easy to teach students when they are at the appropriate level. They appreciate my advice because they know I am knowledgeable of the subject area.

Geosi Gyasi: I have some liking for your poem, “Latent Lunatic”. But I’m wondering how you came up with the title?

Penny Freeland: Latent Lunatic is a love poem about the Man in the Moon and me. It was easy to come up with the title! All of the imagery and language has to do with the moon. It begins when the moon is full and ends with the new moon, when I do not see him anymore. It was so much fun to write!

Geosi Gyasi: Are you influenced by what people say about your writing?

Penny Freeland: Of course is it great when readers like my work. Everyone appreciates good and faithful fans! I do not write for the audience. I mostly write what is spoken in my head. Sometimes I know the audience will not like a particular poem. I keep those to myself.

Geosi Gyasi: Do you consider fiction easier to write than poetry?

Penny Freeland: Not for me. I do love writing fiction and have had some fun doing so. I find poetry easier, because it comes naturally to me.

Geosi Gyasi: What do you hate about your own writing?

Penny Freeland: I hate when the muse takes over me in the middle of the night, or at times when I just cannot stop to write it down. I have missed many great poems that way!

Geosi Gyasi: You earned an MFA in Writing from Sarah Lawrence College in 1995. What sort of books did you read as a student?

Penny Freeland: I read all the masters as an undergraduate at Queens College. At Sarah Lawrence, I was introduced to modern poets and had the pleasure of studying under Jean Valentine, Tom Lux and Mark Doty. I read Billy Collins and was surprised to find that our writing was similar!

Geosi Gyasi: Did you have a purpose for why you chose to pursue writing ahead of other courses?

Penny Freeland: I really did not want to major in writing. I had a few majors ahead of it. I was going to major in education, psychology, and philosophy. A friend of mine wanted to take a poetry workshop and didn’t want to do it on his own. I told him I didn’t want to take it. I said, “Dave—you don’t understand. It is what I do.” He talked me into it and I began to win writing contests at the college for my work. I changed my major to English, with an emphasis on creative writing. It was how I began to work with Marie Ponsot. I was so fortunate! Maybe it was fate—but she influenced me more than anyone else in my life—not just as a poet, but as a person.

Geosi Gyasi: I realized that you’re a musician and songwriter. Could you comment on this?

Penny Freeland: As I said earlier, I have always written songs. I come from a musical family, so my mother taught me to play ukulele and my brother taught me guitar. I formed a parody band called, The Peachpitts in 1990. We played for ten years. I played in comedy clubs in NYC and even played at GBGB’s once! We all got a kick out of that. We had some original songs, but mostly parodies. My son was instrumental to my work with the band. He is a better musician than me and he helped with production issues.

Geosi Gyasi: Do you mind sharing how you’ve managed to keep your 21 year old cat?

Penny Freeland: Sadly, Freddy passed away at the age of 21. I do have luck with pet longevity. I take good care of my animals and feed them on schedule. I make sure they have veterinarian care and lots of love. Freddy lived through so much with me! I buried him and planted white lilies. He has been gone more than a year now.

Geosi Gyasi: Are you an avid reader? What is your favourite book?

Penny Freeland: I read when I can. I read numerous student essays, so my eyes are often tired at the end of the day. It is hard to choose just one favorite book, but if I had to I would say…Les Miserables. I have read it several times, unabridged. At different points in my life, I’ve identified with different characters. I did study French, but am not fluent enough to read it in Hugo’s original voice; it is a dream of mine to do so. My daughters share in this love with me. We saw the musical in NYC more times than we could count.

Geosi Gyasi: Do you find the art of writing joyous?

Penny Freeland: Yes! I love creating things. To me, it is almost like giving birth! I know when something is great and I get chills while writing.

This entry was posted on Saturday, November 22nd, 2014 at 9:29 am and is filed under Uncategorized. You can follow any responses to this entry through the RSS 2.0 feed. You can leave a response, or trackback from your own site.