Charles Bane, Jr. is the American author of The Chapbook (Curbside Splendor ) , Love Poems ( Aldrich Press) , and Three Seasons: Writing Donald Hall (  Collection of Houghton Library, Harvard University ). He created and contributes to The Meaning Of Poetry series for The Gutenberg Project, and is a current nominee as Poet Laureate of Florida. His website is
http://charlesbanejr.com

Geosi Gyasi: How much of “love” is in your book, “Love Poems”?

Charles Bane: The idea for the book came from my agent, who thought it would have reader appeal. I wanted everything graphically about the book to be understated, which my publisher understood. That said, I enjoyed writing the collection.

Geosi Gyasi: Does a writer need special training to be able to write love poems?

Charles Bane: No, you just have to go there. There’s deeply beautiful poems about love out there by very gifted poets. I think you just have to have something to say, and be secure that you can say it.

Geosi Gyasi: Roald Hoffmann, winner of the Nobel Prize for Chemistry and poet said of your book, “Love Poems” that, “it is too rare to find good poems of love in our day.” Do you agree with him?

Charles Bane: I would have a few years ago, but not now. Feminists in particular are showering their collections with poems about relationships, on new terms.

Charles Bane: It was all about marketing, and I follow the advice of my agent closely.

Geosi Gyasi: How did you come to write “The Chapbook”?

Charles Bane: The Chapbook was my first collection, and I learned that getting a box of your poems in the mail is up there with your first sight of Paris, first kiss, first everythings. That said, I think it’s a good sign when a poet is embarrassed by earlier work, and there are several poems in the book I wish hadn’t been published. As you mature, hopefully your work becomes more subtle, stronger, more ambitious. All the poems were previously published and I never put a poem into a collection that hasn’t been published in more than one journal.

Geosi Gyasi: Do you have a favorite poem in your book, “The Chapbook”?

Charles Bane: I like ” Come Beloved”, which I think is very pure, and “My Old Soul”, about the Holocaust.

Geosi Gyasi: Whom do you write for?

Charles Bane: I write for the reader I’ll never meet, but who deserves the best you have.

Geosi Gyasi: Could you tell us what you do as a contributor to The Gutenberg Project?

Charles Bane: It’s a history of poetry in the West, BUT I want to include those women excluded from the Canon, which in the West is all male, all white. There were female troubadours writing in the 13th century, but their work has only recently come to light. I began the series with Virgil’s Georgics translated by John Dryden, because it’s a masterpiece and because it’s completely unread.
http://projectgutenbergproject.blogspot.com/2014/04/the-meaning-of-poetry_7.html

Geosi Gyasi: What inspired your poem, “My Old Soul”?

Charles Bane: The unconscious desire to find meaning in the Holocaust through my own poetic voice.

Geosi Gyasi: Do you what motivates you to write?

Charles Bane: I was writing very young. I had no choice at all, and I think that’s true of all serious poets.

Geosi Gyasi: What is the best time to write?

Charles Bane: Anytime of day that I have lots of coffee, and quiet. I just quit smoking and it took a few months to get used to writing without cigarettes. But it was wonderful, at last, to write again

Geosi Gyasi: How did you come to write, “When Masai Raise Spearheads”?

Charles Bane: The poem is a brew of questions about science, faith and culture. I’m beginning to think all faiths are essentially the same. So the answers–the true answers— we seek about the meaning of life should be cognizant of science.

Geosi Gyasi: Do you earn a living from writing?

Charles Bane: No. I don’t accept payment from journals who need money for operating costs, nor royalties from my books until they hit a certain sales mark. A small press deserves financial reward for accepting the merit of your work. 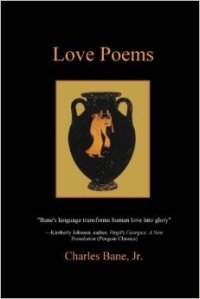 Geosi Gyasi: What is the greatest challenge you’ve ever faced as a writer?

Charles Bane: You have to push , push , push yourself as a writer. I wrote a poem in the persona of Saphho, and I worried it would be ridiculed. You’re awfully vulnerable out there, and the definitions of sexuality, gender and relationship are all in flux. It would be a good time to play it safe. But if you play it safe creatively, you’re done. The poem, “Thunder, Lightning”, is, fortunately, popular.
http://rpdsociety.com/latestissue/14/1/2015

Geosi Gyasi: Could you spend some time to talk about your poem, “My Love” as published in the Issue 2, Summer 2014 of One Throne Magazine?

Charles Bane: That’s the only surviving poem from my childhood which I wrote at about twelve. The version in One Throne is incomplete, because I sent it off from memory. I like its image of sunset: ” The loom removed in lowering steps”, and night- time: ” A hearth of sparks is overturned” I’m putting the poem in my next book.

Geosi Gyasi: How true are your “love” poems?

Charles Bane: They are as true as the effect they produce for the reader. Personally, the poem for my son is the truest, literally.

Geosi Gyasi: Who are your literary forbears?

Geosi Gyasi: How would you describe your “style” of writing?

Charles Bane: It’s usually described as romantic, which is complimentary if you’re not described as a “romantic poet”, which I’m not.

Geosi Gyasi: Do you care about “imagery” when you write?

Charles Bane: No, not at all.  The poem unspools from you and the images fall into place of their own accord. A poet is as much downhill skier as artist, courting disaster at the end of every line break as you hurtle towards an end that explodes into meaning.

Geosi Gyasi: What do you do when a poem you’re writing is not going well for you?

Charles Bane: I write online, and put it in my drafts folder, but the majority of them will be left aside. I read that Kay Ryan throws  away 80% of her work. That’s huge.

Geosi Gyasi: What are you currently working on?

Charles Bane: I have a new collection coming out from Urban Farmhouse Press: “The Ends Of The Earth: Collected Poems”. It will blend my previous work with about 15 or twenty new poems. My agent is seeking distribution through China Mobile.com which has millions of English- speaking readers. That’s exciting.

This entry was posted on Saturday, May 23rd, 2015 at 1:00 am and is filed under Uncategorized. You can follow any responses to this entry through the RSS 2.0 feed. You can leave a response, or trackback from your own site.