Erin Malone’s first full-length collection, Hover, won the Patricia Bibby Award from Tebot Bach Press and was published in March 2015. What Sound Does It Make, a chapbook, appeared in 2008 from Concrete Wolf Press. The recipient of grants from Washington’s Artist Trust, 4Culture, and the Colorado Council of the Arts, she’s taught writing at the University of Colorado in Colorado Springs, Richard Hugo House in Seattle, at the University of Washington Rome Center in Italy, and through Seattle Arts & Lectures’ Writers in the Schools program. She’s been given a Jack Straw Writer’s Fellowship for 2015. You can find out more at www.erinmalone.net.

Geosi Gyasi: Beginning with your first full-length collection, “Hover”, why did you decide to write it?

Erin Malone: I’d been working on a manuscript for years—about 10—when I finally started writing the poems that became Hover. At its heart, that original manuscript was about the death of my brother in childhood; the poems surrounding it were growing up poems, falling in love poems, you know. I think I’d started sending it to a few contests. But then I gave birth to my son, and suffered severe anxiety in the months following. I couldn’t concentrate long enough to read and understand a sentence, let alone write. I think it took me about a year to start writing again, and when I did the poems were expressions of that dislocation and fear I felt. So I guess my answer is that I didn’t really decide to write it; I had to write it. And I wrote it again and again until it was published—another 10 years or so. None of the poems from original manuscript made it into Hover, but the idea behind them did. The death of my brother and the anxiety about my son are what inform this book.

Geosi Gyasi: Do you have any special reason why you decided to become a writer?

Erin Malone: I don’t know. I think I felt from an early age that I was good at writing. In elementary school I wrote comics and ghost stories and even a play that my teacher let me cast and produce! I was very lucky to be so encouraged. In high school I wrote terrible poems, and in college more terrible poems, but I started to get better. It didn’t occur to me that I could go to school to study creative writing until a college professor clued me in. So I went to graduate school, which helped me feel serious (too serious?) about it.

Geosi Gyasi: Do you come from a family of writers?

Erin Malone: No, but I come from a family of readers.

Geosi Gyasi: What books did you read growing up?

Geosi Gyasi: As a writer, who are your audience?

Erin Malone: As a poet I have to admit that it’s probably mostly other poets, although I wish it were wider, of course. I think it might surprise people to know how welcoming poets and poetry can be. We’re like rescue dogs—if you give us a little time and attention, we’re yours for life.

Geosi Gyasi: Do you have any persons who have influenced your career as a writer?

Erin Malone: Well, other writers. Poets like Elizabeth Bishop, Gwendolyn Brooks, Donald Justice, Mark Strand, Louise Glück—I could go on and on. But other people who aren’t writers influence me too: family, teachers, friends, who ask me what I’m working on or who want to have a conversation about a book or about anything that really matters to them. That kind of support is sustaining.

Geosi Gyasi: How much research goes into your writing?

Erin Malone: Usually not much. But I am working on a project right now that requires some archival research, which I like. It feels like opening a series of doors. 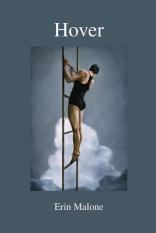 Geosi Gyasi: Are you a fan of short poems?

Erin Malone: Sure. The economy of a short poem is like magic trick, when it’s done well.

Geosi Gyasi: Tell me something about your chapbook, “What Sound Does It Make”?

Erin Malone: All of the poems in What Sound Does It Make are also in Hover, though some are revised. All of them have to do with that dissociative feeling around my son’s birth.

Geosi Gyasi: Was it difficult securing a publisher for “What Sound Does It Make”?

Erin Malone: It did take time, a few years, to write those poems, and during that time I was sending the manuscript around to chapbook contests. Contests are difficult, yes, because they’re hit-or-miss—you have to be patient and just keep sending to different places. That said, I was extremely lucky to land on Concrete Wolf Press—Lana Hechtman Ayers is a talented and generous editor, and I love the book she made for me.

Geosi Gyasi: You’ve recently been given a Jack Straw Writer’s Fellowship for 2015. Could you tell me what this fellowship is all about?

Erin Malone: This fellowship supports Washington State writers by promoting their work through a series of readings, and by producing a professional podcast for each writer that includes an interview and an excerpt from one of the readings. Another great thing about it is that 12 writers are chosen, so over the course of the year you get to know each other—it’s a nice camaraderie.

Geosi Gyasi: Did you have a hand in the making of the photo cover of your book, “Hover”?

Erin Malone: Actually, that’s a painting by Eric Zener. I did get to choose the cover art, and I love his work. You can check out his website at www.ericzener.com.

Geosi Gyasi: What are you reading at the moment?

Erin Malone: The Book of Hours, by Marianne Boruch. Also Wind in a Box (again), by Terrance Hayes.

Geosi Gyasi: What is currently on your writing table?

Erin Malone: A mess. And also a couple of new poems I’m working on.

Geosi Gyasi: Do you ever have writer’s block?

Erin Malone: I have stretches of time when I’m not writing, and that can feel very frustrating. But usually I can get through it by reading other poets, and slowing down to pay attention. If I do that and give myself some time, the writing will happen.

Geosi Gyasi: In your view, what is the best time to write?

Erin Malone: Whenever the house is quiet.

This entry was posted on Thursday, October 1st, 2015 at 8:03 pm and is filed under Uncategorized. You can follow any responses to this entry through the RSS 2.0 feed. You can leave a response, or trackback from your own site.