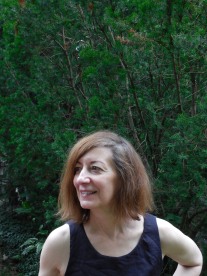 Susan Azar Porterfield is the author of two book of poetry, In the Garden of Our Spines and Kibbe  (Mayapple Press) as well as of a chapbook Beirut Redux  (Finishingline).  She is the editor of Zen, Poetry, the Art of Lucien Stryk (Ohio UP) and has written on Stryk for Poets & Writers and The Writer’s Chronicle.  She is the recipient of an Illinois Arts Council Award for Poetry and is the Associate Poetry Editor for Fifthwednesday Journal.  She is a Professor of English at Rockford University. Her manuscript of poems, “Dirt, Root, Silk” won the 2015 Cider Press Review Editor’s Prize.

Geosi Gyasi: Tell me something about your first book, “In the Garden of Our Spines”?

Susan Porterfield: A first book is always the writer’s apprenticeship, no matter how complete or mature it may or may not be. In the Garden of Our Spines is a short book, because even though I had many more pieces that I could have included—and the publisher had to prod me to include more—I only wanted to include poems that I was utterly sure of. The works in that book, more than anything else they may do for anybody else, show me how important I found the process of writing to be, not that I didn’t know this before, but I didn’t know that it was quite that important for me.

Geosi Gyasi: Did you struggle finding a publisher for your first book?

Susan Porterfield: “Struggle” is relative, I suppose. Yes and no. It didn’t take me that long—maybe a year of active looking—and “active” is also relative.

Geosi Gyasi: Do you think “In the Garden of our Spines” was a success?

Susan Porterfield: Well, there again, the word “success” is a minefield. I’m sure that all writers have different definitions of this concept. Did publishers in NYC come calling after the book came out? No. Is that success? One kind. Not sure if this is what you mean. Other kinds of successes: connecting with my audience (whoever read the book and took the time to tell me what they thought), connecting with myself as a poet (and this is no small thing, especially perhaps for women—I mean seeing themselves as having something worth saying, seeing themselves as having a right to try to infiltrate the canon), connecting with the empirical world on a special, more spiritual level. Well, then yes, it is a success.

Susan Porterfield: Two things, really. My father is Lebanese, and because of him, I’d always had an interest in the country and culture of Lebanon. I’d never been able to visit, in large part because of the Lebanese Civil War. When it was over, however, I was in a position to be able to apply for a Fulbright to Lebanon and was accepted, so I spent some time there. My experience there also influenced the book.

Geosi Gyasi: What is the main difference between your first and second books?

Susan Porterfield: The second book centers around a theme—my time in Lebanon and what I found there in terms of my heritage, my father, Middle-Eastern politics. It’s also more narrative.

Geosi Gyasi: Do you have any special theme(s) you often write on?

Susan Porterfield: I notice that I’m very attracted to science—particularly to theories about time and the universe, which is strange, since I was always a humanities person in school. I also am attracted to writing about animals—I think because they have no words and are as mysterious as the universe. Crazy, when you think about it, how we share this planet with them—the only other sentient beings in our sphere. Shouldn’t we pay attention? I write about social and political situations. I think that one of the great things that poetry (all art) has done is to confront or address the wrongs that we see in society. This has historically been one of the roles of art, and I like that. I’m impatient with art that only focuses on itself—art that’s only about art I find to be boring.

Geosi Gyasi: What is the best time to write?

Susan Porterfield: In the morning. In the afternoon. In the evening. In the middle of the night.

Geosi Gyasi: You have studied and taught in both London and Lebanon. Could you tell us what you know about these two countries?

Susan Porterfield: This is a big question. I’ll tackle Lebanon first, though I love both places. Lebanon breaks my heart. So beautiful, so fragile, situated as it is between Syria and Israel. Does it have a chance of survival? No one knows. The people are marvelous, trying to accommodate many different religions, to overcome the legacy of their brutal civil war and to live normal lives again. They are naturally drawn to beauty and to art; I think it’s in their bones. In their hearts, I think that they are a joyous people, but they also know darkness.

As for London, one of the world’s greatest cities. You are never at a loss for something to do in London. Just take to the streets, just walk around, and if you’re in a bad mood, that mood with soon lift. I’ve been both a tourist in London and I’ve worked there (I’ve also been a student—I have a M.A. in 19th-century British art from the Courtauld) and to me, there is very little difference. Yes, when you work there, your days are more routine, but the energy and excitement of the place is always there. It’s so alive, and I feel more alive when I’m there.

Geosi Gyasi: What is your greatest achievement as a writer?

Susan Porterfield: Knowing that not everything that I write is golden.

Susan Porterfield: Yes, I was eleven. It was about trees.

Geosi Gyasi: How is the process of writing like for you?

Susan Porterfield: Awful. Some people say that they “must” write. I never feel that way. Writing for me is always an act of will. I think this is so, because, for me, there’s so many opportunities to be disappointed. I’m not really sure why I do it, then, since it can be painful. I know, however, that I feel as if I’m not doing what I should if I’m not writing. And besides, if I feel that I’ve gotten something right, then, honest-to-God, nothing else compares.

Geosi Gyasi: What do you often do when a poem you’re writing is not going well?

Susan Porterfield: Depends upon when—if I just can’t get it, I’ll abandon the poor, little thing. If it’s just normal “not going well,” then I do this thing, where I put copies of the poem in places where I don’t expect it to be so that I can, if you will, just happen to come upon it and read it. It’s amazing how often, when I just “come upon” the difficult draft of a poem, I can jiggle it in ways that I couldn’t have just half a day earlier.

Geosi Gyasi: Is it profitable to be a writer?

Susan Porterfield: Of poetry? No, of course not. We don’t value it, which may be why it’s valuable.

Geosi Gyasi: Do you mind telling me a bit about your work as a Professor of English at Rockford College?

Susan Porterfield: Rockford College just became Rockford University—though it’s virtually the same place, but anyway, as is common at small, private schools, we teach 12 hour loads each semester, and in some ways, we are expected to be generalists. We do have our specialties, and mine is poetry and poetry writing as well as 19th-century British lit., which is what my Ph.D. is in, but, for example, I also teach the seminar on literary criticism. Our department is one of the largest at the university—we have 6 members.

Geosi Gyasi: What is the most boring part of writing?

Geosi Gyasi: Are you a fan of short poems?

Susan Porterfield: I really am. I love those pieces that can say so much with few words. It’s thrilling. Like a punch to the head or gut—like a remarkable piece of music. You don’t have time to think; it just gets you.

Geosi Gyasi: Do you engage in poetry performances?

Susan Porterfield: Not in the traditional sense. Though all poetry readings are performance, or should be.

Geosi Gyasi: What do you consider as the greatest poem you’ve ever written?

Susan Porterfield: The one I haven’t written on paper yet.

Geosi Gyasi: Could you tell me anything about your birthplace, Chicago?

Susan Porterfield: A remarkable place. I still live near Chicago, and like any great city, it has its own character. I would say, for me, Chicago is and always will be home. It can be brutal, we know, but it’s the Midwest. It’s accepting of others, other cultures, oddities—whoever you are, you could have a place there. People truly are friendly and, unlike NYC, not really in-your-face. Midwesterners tend to avoid confrontation. Live and let live. It’s odd for me to say this, when we think of the whole Chiraq thing, but it’s a gentle place, deep down.

Geosi Gyasi: What are your future literary aspirations?

Susan Porterfield: To learn to be the best poet I can, to write better (more insightfully, more intelligently) every day.

This entry was posted on Tuesday, January 12th, 2016 at 10:26 am and is filed under Uncategorized. You can follow any responses to this entry through the RSS 2.0 feed. You can leave a response, or trackback from your own site.