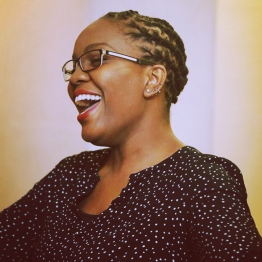 Chikodili Emelumadu is a Nigerian writer, broadcaster and blogger living in London. She has a BA in English language and literature from Nnamdi Azikiwe University Awka and an MA in Cross Cultural Communications and International Relations from the University of Newcastle upon Tyne. Her fiction has appeared or is forthcoming in Apex, Eclectica, Luna Station Quarterly, Omenana, One Throne and Sub-Q magazine. She was a 2015 Shirley Jackson nominee.

Geosi Gyasi: What is the inspiration behind your story, “Jermyn”?

Chikodili Emelumadu: Umm…I don’t know. These sorts of questions are always difficult to answer because there is no right reply. It might have been something which I wasn’t even aware was influencing me. All I know is, I finished work for the day, shut down my computer and went to bed. There I was trying to sleep and this dog was howling in my head. I had to bring out my phone and write the story! I did around 2000+ words before it let me sleep.

Chikodili Emelumadu: Ever?! No way. I’ve been writing since I can remember (I’m sure it’s the same old story with a lot of writers, people are probably sick of hearing it.) But I have not always done the same medium. When I was a kid, I read a lot of plays so I started writing those first. For some reason, the format appealed to me. It was all ‘Exit stage left’ and whatnot even before I’d ever seen a staged play. Then I moved on to poetry for a bit – a period that coincided with my teens. Ah, such beautiful, angst, AWFUL poetry. Then novels and novellas, and I have finally ‘settled’ on short stories. That being said, I was in Nigeria recently and found a novel I started when I was thirteen or so, about a protagonist named ‘Jade’ who had green eyes. Oh boy. Cringe-worthy.

Geosi Gyasi: How did you come to write, “Light and Light”?

Chikodili Emelumadu: Erm…I cannot recall. I just heard this woman’s voice in my head – superior-sounding — so I started writing down what she was saying. Then she signed it ‘Superintendent Mrs Adachukwu Godschildson’ which cracked me up so I followed her home to see what she was about. I did not like her house very much, let me tell you.

Geosi Gyasi: Tell me about your story “Soup” as published by One Throne Magazine?

Chikodili Emelumadu: Well, ‘Soup’ tells the story of a girl, Akwaugo, who bonds with a very gossipy fish she’s supposed to be preparing for the soup pot. Her mother has just died and Akwaugo is beginning to realize that in a way, maybe, she is dying too. The story is about what she does next.

Geosi Gyasi: You’re a Nigerian and broadcaster living in London. Could you tell me about your childhood?

Chikodili Emelumadu: I was born in a little village here in the UK called, Worksop and grew up in Nigeria with five siblings (eventually). I returned to the UK at 21. My parents are both in the medical profession so for a while there was the hope that I’d end up in that same place. It was all done in love, I suppose. Parents want the best for you. But as our people say: Everybody has a different chi (guiding spirit/personal destiny). Maybe if I’d gone into their profession, I might have been the kind of doctor that kills people for fun, like, proper Hannibal stuff.

Geosi Gyasi: Is there any major difference between a writer and broadcaster?

Chikodili Emelumadu: Yes. I guess both industries revolve around telling stories (yours or other people’s), but writing deals with the written word as a method of reaching people while broadcasting is audio/video.

Geosi Gyasi: Do you make money from writing?

Chikodili Emelumadu: Not as much as I’d like! Thank God Indomie noodles are cheap, is all I’m saying.

Geosi Gyasi: Could you tell me about the literary scene in London?

Chikodili Emelumadu: I’m not very active on the London literary scene. I used to be, as a journalist, because my work required it. I’m a bit reclusive; write, read, rinse, repeat – in between other IRL activities. Most of my interaction with the literary scene here nowadays is virtual/online. London is vibrant in every way, even online.

Geosi Gyasi: What do you hope to achieve with your writing?

Chikodili Emelumadu: I hope to be better. I never want to rest on my (perceived) laurels. I want to keep going, challenging myself, meeting people and being in situations that will always inspire me to do more, faster, better. I want to do what I do to the best of my ability.

Geosi Gyasi: You have the opportunity to end the interview?

Chikodili Emelumadu: Everything I’ve just told you is a lie.

This entry was posted on Monday, July 25th, 2016 at 4:14 pm and is filed under Uncategorized. You can follow any responses to this entry through the RSS 2.0 feed. You can leave a response, or trackback from your own site.