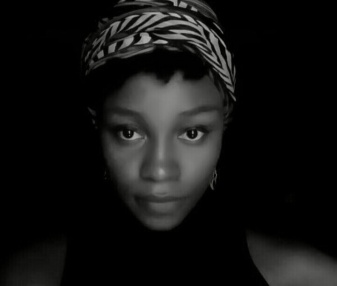 Kechi Nomu was born in 1987. She grew up in Nigeria under two Nigerian dictatorships. Her poems have appeared in Saraba Magazine, The ANA Poetry Review, Expound Magazine, Sentinel and Brittle Paper. She writes film and theatre reviews for Olisatv. Her short stories have been workshopped at the Farafina Creative Writing Workshop and the Caine Prize Short Story Surgery. Her fiction and nonfiction have appeared online and in print.

Geosi Gyasi: Is writing for you, a calling or choice?

Kechi Nomu: Calling and choice are both very strong words. I like to think that I write because I grew up aware of words and their power. The very unsexy reason is my mother teaches literature and my father writes. He won a regional literary thing many lifetimes ago, and my parents used to taunt each other with lines from Shakespeare for the fun of it and because they thought it was a cool thing to do. This was when I was much younger. I did not always appreciate the gift that this kind of childhood was until I began to seek out books and writing on my own.

Geosi Gyasi: I am curious to know more about your father as a writer. Could you tell me anything about his writing?

Kechi Nomu: My father writes fiction. He belongs to a generation of Nigerians that had to work out a straightforward kind of opportunity cost. Writing was an unrealistic pursuit. He is retired now so he spends most of his free time writing. And he’s very protective of his flash drive in a way that is funny-cute.

Geosi Gyasi: How much of your time do you spend on poetry?

Kechi Nomu: How much time I spend on poetry is not something I’ve actively thought about, but as a person in the world, poetry is how I see, how I observe, how I mostly think about things. So, this has to be a fair amount of time, I think.

Geosi Gyasi: How did you first hear about the Brunel International African Poetry Prize?

Kechi Nomu: I don’t know that there is a definitive way to talk about the impact of literary workshops for the writer in general or the budding poet specifically, beyond the fact that workshops do what workshops are meant to do. They can be great places to find community, get feedback on your writing and improve your reading. In this way, I find that these opportunities have been very valuable to me as a writer.

Geosi Gyasi: Personally, what do you think are your chances of winning this year’s Brunel International African Poetry Prize?

Kechi Nomu: Geosi, I’d love to win the Brunel International African Poetry Prize this year. It is a strong shortlist so winning the prize would be really nice.

Geosi Gyasi: Is writing for you, a calling or choice?

Kechi Nomu: Calling and choice are both very strong words. I like to think that I write because I grew up aware of words and their power…

Geosi Gyasi: You seem to pay close attention to detail with your poetry. Why is that so?

Kechi Nomu: The poems that I continue to go back to are poems that seem to pay attention to what is said and the music of how it is said, all of this done with an economy of words that I find beautiful. In this moment, I’m thinking of Agostinho Neto’s Kinaxixi, Ocean Vuoug’s On Earth We Are Briefly Gorgeous, Adrienne Rich’s In Those Years, Lola Shoneyin’s Distance, Lydia Kasese’s The Science of Nail Polish and Zainabu Jallo’s Dear Inner Man. What these poems do is something I’m constantly trying to approximate.

Or, it could just be that writing poems this way is my calling. Lol.

Geosi Gyasi: What specific work do you do at Olisatv?

Kechi Nomu: I work as an editor and then I write culture reviews.

Kechi Nomu: I’m very interested in the ways that transitions occur and how people function within transitions, particularly within man-made disruptions like coup d’etats and the dictatorships that keep them in place. I think of my experience and the experiences of the people I know intimately in terms of how we moved between these realities time-wise. The effect that this had and continues to have on us in ways that we are not always ready to account for.

We talk it publicly. There have been books and films and national panels that we have had to confront too. But, it is more the ways we permit ourselves to talk about it in our personal spaces. How we might say, for instance, when we talk about the dictatorships: this regime and that regime, which one was worse? But what we are really saying is: Which one dehumanised us more? Which one made us lesser versions of ourselves? What we completely avoid is: What did we do with these selves going forward?

Geosi Gyasi: What idea kick-started your poem, “Note to the Boy Kicking the Stone”?

Kechi Nomu: “Note to the Boy Kicking the Stone” began as a love letter of sorts to boyhood. I was for a long time preoccupied with this image of the boy, the road, the stone and just the ways that the last two can be such agents of psychological transformation. This picture of a boy kicking a stone in my mind became a point of connection between innocence and the loss of innocence. Between the boys we know and the strangers they become. I have also, for a while, been thinking about the under-examined and over-examined ways that people who share connections continue to exist in each other’s spaces as they acquire those unavoidable human things: baggage.

This entry was posted on Friday, April 21st, 2017 at 2:38 pm and is filed under Uncategorized. You can follow any responses to this entry through the RSS 2.0 feed. You can leave a response, or trackback from your own site.