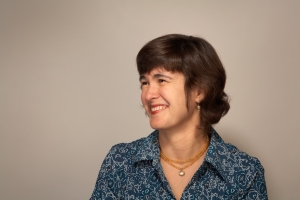 Lesley Wheeler is a poet, essayist, and scholar whose collections include The Receptionist and Other Tales, a Tiptree Award Honor Book; Heterotopia, winner of the Barrow Street Press Poetry Prize; and Heathen. Her fourth full-length poetry collection, Radioland, is forthcoming in 2015. Her most recent scholarly book is Voicing American Poetry: Sound and Performance from the 1920s to the Present, and she is writing a study about twenty-first-century verse with the working title Taking Poetry Personally.  New poems and essays appear or are forthcoming in Gettysburg Review, Tahoma Review, and Poetry, and she blogs about poetry at “The Cave, The Hive” (http://lesleywheeler.org/). Wheeler is the Henry S. Fox Professor of English at Washington and Lee University in Lexington, Virginia, where she lives with writer Chris Gavaler and their two children.

Geosi Gyasi: You were born in New York, raised in New Jersey and reside in Virginia. Could you tell us anything about all these three places?

Lesley Wheeler: They’re all mixtures of beauty and ugliness, and all have great poetic heritages. Maybe that describes every human-inhabited place on earth? In any case, none of these states felt like home until after I left, but I do find myself writing more and more about Virginian landscapes and history. There are poems about local landmarks in my first book, Heathen—Woods Creek Trail, Foamhenge—but engagement with place is deeper and more deliberate in the poems I’m drafting this year.

Geosi Gyasi: Could you tell us how you got the idea for “The Receptionist and Other Tales”?

Lesley Wheeler: Several lines of thinking converged in that book: my immersion in university politics was important, but so was heavy reading of fantasy and other genres of speculative fiction. I read Diana Wynne Jones’ Tough Guide to Fantasyland and thought: I can do this—I know these tropes in my bones. At the moment of composition, too, I desperately needed to construct an alternate world for myself in which some of the badness in my life could be ordered into terza rima and into a plot that turned out all right. Writing it sustained me during a demoralizing time.

Lesley Wheeler: Heterotopia is rooted in storytelling, particularly the tales my mother and other relatives told about Liverpool in the forties and fifties. I revisited the city, too, and conducted research into its history—original settlements, the city’s key role in the international slave trade, poverty and riots in the twentieth century. I thought about those stories for a couple of decades before I was able to transform some of them into poems. It was difficult to figure out how to position myself authentically in relation to second-hand experience.

Geosi Gyasi: Could you give is a glimpse of your next poetry collection, “Radioland”?

Lesley Wheeler: Radioland is another title, like Heterotopia and Heathen, that conjures an imaginary space, in this case a community of people who listen to disembodied voices in the dark. I associate its retro sound with my father, who was born in 1925, when radio was in ascendency, and died as I was composing these poems. I was in New Zealand for part of this period, too, so communication over distances is a persistent motif. There are several ghost stories in the book, as well as poems about the static of adolescence—my own and my daughter’s.

Geosi Gyasi: Why do you write?

Lesley Wheeler: It’s a compulsion; I fall apart when I stop for too long. It’s also a continuation, a response, to the sustenance that reading has always given me. Reading is an abiding pleasure in part because it allows immersion in other worlds and entry into other minds—even though those consciousnesses are fictional, or fictionalized, their existence in words assuages loneliness, gives me a sense of continuity despite loss. It’s wonderful to know that Emily Dickinson is always there, and Jane Eyre. I read as constantly as I write, mostly in the genres of fiction and poetry, but I read some memoir and criticism too and lots of journalism.

Geosi Gyasi: Have you ever been rejected for your work?

Lesley Wheeler: Yes! I feel successful now that my rejection to acceptance ratio is about 5:1, rather than 20:1 or worse, as it was when I started. That’s for poems, but essays and books are hard too, and that first poetry book can be unbelievably difficult to find a home for—I submitted and revised and resubmitted to contests and other opportunities with high intensity for five years. I tend to think scholarly publishing is meritocratic and poetry publishing is more controlled by fashion and connections, but I’ve seen exceptions to both of those generalizations; I can see in retrospect that early versions of Heathen weren’t nearly as good as I imagined at the time. Sometimes I can shrug it off and sometimes rejection really gets to me, but it’s as inevitable as weather. You can’t be really trying if you’re not sometimes failing.

Geosi Gyasi: When and where do you often write?

Lesley Wheeler: Whenever and wherever life lets me; although I like late afternoon, that’s rarely possible. Right now I have good spaces at home and at work (although the latter is pretty hectic during term-time), but I’ve scribbled lines during lectures, leaning on the back of a toybox, waiting in cars. I need disciplined work-times when I’m writing something long or putting a book together—10 to 6 in the summer, after a walk in the early-morning coolness, when I can—but lots of poems and projects begin unpredictably.

Geosi Gyasi: What things are likely to be found on your writing desk?

Lesley Wheeler: Always, a china pot and matching tea-cup on a tray with a jar of honey. My home desk has a birch-bark basket bristling with pens and pencils and my father’s engineering ruler. I do more of my research-writing at the office, so that’s spilling over with books and to-do lists.

Geosi Gyasi: Have you ever written out of anger?

Lesley Wheeler: Like a lot of women, I find it easy to articulate anger on behalf of other people, hard to articulate anger about wrongs done to me. And I think forgiveness begets better sentences than rage, maybe because it’s a more complex emotion, harder to generate and sustain. That said, yes, a lot of my writing springs from a desire to create or restore justice. Each of my books contains a few furious poems: “Virginia is for Heterosexual Lovers,” “Selfish,” “Vronhill Street in Liverpool 8,” plus Radioland contains several pieces reflecting my anger at my father. The Receptionist may be my angriest poem as well as my longest one.

Geosi Gyasi: What is the most difficult part of writing?

Lesley Wheeler: Closure. Discovering an ending that resolves the poem’s questions in a satisfying way but that isn’t pat or predictable—that requires great luck, extended searching, or both. Ending a poem well but with at least a hint of optimism—that’s even harder. The more I think about how I want to spend my writing effort, the more I want to add a little joy or pleasure to the world, but pain is a readier subject.

Geosi Gyasi: Do you do many drafts?

Lesley Wheeler: I draft, tinker, and then put a poem aside, usually for months, until I can see it freshly. I sometimes repeat that process a few times, seeking advice from a couple of trusted friends along the way, before I’m sure a poem is more-or-less right. I do sometimes get excited about a piece and send it out quickly, but that usually turns out to be a mistake; I can’t see the big picture if I’m still swept up by the inspiration. I fall in love with a turn of phrase or some other neat trick and feel prematurely convinced of my own brilliance, but a well-revised poem is attentive to what an intelligent reader with no predisposition to like you might think or feel about it. You have to become alien to yourself to judge a poem that way, and I don’t have the knack of that, so I let time help. In a year we’ll all be alien to ourselves, right?

This entry was posted on Saturday, November 8th, 2014 at 1:41 pm and is filed under Uncategorized. You can follow any responses to this entry through the RSS 2.0 feed. You can leave a response, or trackback from your own site.

One Response to Interview with American Poet, Lesley Wheeler