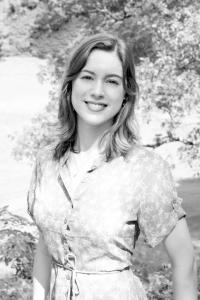 Brief Biography: Jenneva lives and works in Tempe, Arizona, with her husband, sculptor Elliott Kayser. She is the former cohost of the Skazat poetry readings in Ann Arbor, MI, and her work can be seen in Rattle, The Smoking Poet, and Quarter After Eight. She is currently finishing a full length manuscript exploring the Greek Myth of Cupid and Psyche.

Geosi Gyasi: You were writing under the name Jenneva Scholz. What has necessitated the change of name?

Jenneva Kayser: I had the good fortune to meet a wonderful man, and we are now married. Before we met, I was starting a book of poetry that explores the myth of Cupid and Psyche, and it is funny to see how my approach to the story has changed. It began as a grim feminist critique of the power structures within a family, and that element is still there, but now I’m able to see the heart of the myth for what it really is: a love story. A very human love story, with fears and failures, and people trying to control each other, but ultimately working hard to make amends and learn to trust each other.

Geosi Gyasi: You teach ceramics and write poetry. How do you manage to do the two?

Jenneva Kayser: I teach part-time, and write part-time, and have other jobs as well. I think that the work that makes your money and the work that give your life meaning and joy and purpose don’t have to be the same thing. I appreciate the freedom I have because I don’t depend on my art to support me financially.

Geosi Gyasi: Tell us more about what we don’t know about ceramics?

Jenneva Kayser: Working with clay helps balance my experience as a writer because it is a very methodical, technical process. Most of the skill involved depends on a sense of timing, and plenty of patience. Throwing pottery on the wheel is a meditative, hypnotic experience, and hours can go by without my having had any thoughts. It helps to keep me centered and quiet my mind.

Both practices have the element of surprise and chance, where something that you thought would turn out one way ends up quite another. The difference is that with ceramics, once a piece is fired and comes out of the kiln, you can’t make any more changes to it. If it comes out badly, all you can do is throw it out and start over. Sometimes it breaks your heart, definitely, but you have to learn from it and move on. This is a good reminder sometimes when I am tinkering for hours on a poem that clearly isn’t going to work.

Geosi Gyasi: When did you set out to write “Sylvia Plath’s Voice on CD”? What inspired the poem?

Jenneva Kayser: I highly encourage other writers to seek out recordings of poems in addition to reading them—hearing Sylvia Plath read her poetry was haunting. She has an incredibly glamorous movie-star voice. It still strikes me as amazing to have a record of what a person long-dead sounded like, to hear them breathe.

Geosi Gyasi: How did you get your way into poetry?

Jenneva Kayser: Both my parents are writers, so from an early age they encouraged me to use writing and reading as a way of understanding the world. I was a ferocious reader, and one summer I tore my way through over a hundred books from the local library, determined to win the award for being the patron who read the most books. I did win, but was dismayed to learn that the prize was an encyclopedia of sports. This seemed like a strange choice of reward for a person who just spent the entire summer reading, almost like a rebuke– but of course, I read the whole thing anyway.

Geosi Gyasi: At what time of the day do you write?

Jenneva Kayser: Whenever I get the opportunity.

Geosi Gyasi: What inspired your poem, “The Famine of Love”?

Jenneva Kayser: There is a moment in the story of Cupid and Psyche when Cupid is so depressed by being forbidden to marry his love that he stops doing his job, and everything on earth stops mating, as they all lose desire for one another. I wanted to think through what that would actually look like, as well as explore the emotional experience of faded passion. The Greek myths are full of events like this, where the gods in their moods and whims wreak havok on human lives with floods and storms and people are constantly getting turned into trees and animals, sometimes as a reward and sometimes as a punishment. In a contemporary context, it can serve as an allegory for the way the desires of the powerful affect the lives of everyone else.

Geosi Gyasi: Does writing come easy for you?

Jenneva Kayser: My best work does arrive easily. I’ll be drifting off to sleep, or eating breakfast, and then all of a sudden the poem is there and I have to scramble to get it all down before it disappears. I know writers who insist that you keep a schedule, write for three hours every afternoon whether you have any ideas or not—I don’t. I do try to be disciplined, however, and have had a great partnership with another poet, Perry Janes, an excellent writer and invaluable critic of my work. We’ll set a date to meet, and I know that if I show up to the café empty-handed, I am wasting both our time. My best writing comes from learning, and reading, and researching— I never know what new information will lead to a poem, so I try to be open to learning from every discipline. That being said, the poems rarely come completely finished and perfect, so like every writer, I spend a lot of time banging my head against my desk.

Geosi Gyasi: Do you have specific theme(s) you often write on?

Jenneva Kayser: My subject matter is fairly diverse, as I am constantly reading and learning new things. I’m often influenced by current events, and have found myself writing more about race relations in the U.S. after the shooting and subsequent riots in Ferguson, Missouri this summer.

Geosi Gyasi: Do you consider your emotions or personal feelings when writing?

Jenneva Kayser: Yes, I think it is almost impossible not to, and of course my experience and perspectives and culture and education shape how I view the lives and experiences of others. Right now however, I am more interested in writing about and trying to understand other people and events happening out in the world than in writing about myself.

Geosi Gyasi: What do you think about the age of internet and writing?

Jenneva Kayser: This very conversation is a great example of the magical, unexpected opportunities that can happen now that would have been unlikely, if not impossible, earlier in my own lifetime. It is a powerful tool for connecting and sharing, two important words for a poet. It also allows for a much faster turn-around time than printed media, and Rattle magazine’s “Poets Respond” series, where poets react to events in the news, is a great example. I love books though, and personally find reading on a device not nearly as inviting.

Geosi Gyasi: You graduated from Kalamazoo college with B.A in Fine Arts. Could you tell us about your student days in college? What were some of the interesting teachers you met?

Jenneva Kayser: I had many excellent teachers, but two in particular directly influenced my life, Sarah Lindley, a ceramic sculptor, and Diane Seuss, a poet. They had very different teaching styles, but from both of them I learned to approach the creative process with discipline and planning, and to take the work seriously. I also had the opportunity while I was a student to live for a semester in Philadelphia, working for The Clay Studio, and for six months in Ecuador, teaching kids academic subjects through art projects through an organization called ArtEducarte. I learned more from this hands-on experience than I did from than any classes I took, and I try to keep that in mind as a teacher and let my students try things for themselves as much as possible.

Geosi Gyasi: Do you have any secret flaw as a writer?

Jenneva Kayser: I don’t know if I would call it a “secret flaw,” but this conversation is a good reminder to read more works by authors outside of the U.S. It’s a big world, full of poems!

This entry was posted on Tuesday, December 2nd, 2014 at 11:41 pm and is filed under Uncategorized. You can follow any responses to this entry through the RSS 2.0 feed. You can leave a response, or trackback from your own site.